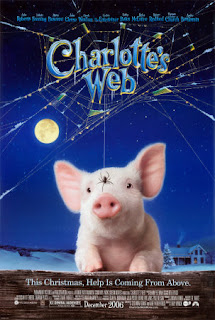 Long time visitors to Gotthammer are going to note a shift in the number of children's movies I'll be reviewing. We hardly ever find the time to watch grown up films anymore - they aren't the sort of thing we want to expose Gunnar to just yet, and we don't stay up late enough after he goes to bed to watch anything more than an episode of whichever television series we're watching on DVD. So, there's the caveat. I hope the reviews help those of you who are also parents.

The 2006 version of Charlotte's Web is a very able live-action reworking of E.B. White's tale of the deep relationship between a pig, destined to die as Christmas ham, and the spider who saves him, ironically resulting in the very fate she hoped to save the pig from. Julia Roberts' voice ...(read more)is well suited to Charlotte's demeanor, and most of the star studded voice casting is excellent. Comparisons to Babe are ridiculous, considering that Wilbur has seniority as the talking pig in children's literature. Refreshingly squeaky clean amidst all the sneaky innuendo I find in too many children's movies these days. A good family film, recommended.
Posted by Mike Perschon at 8:24 AM